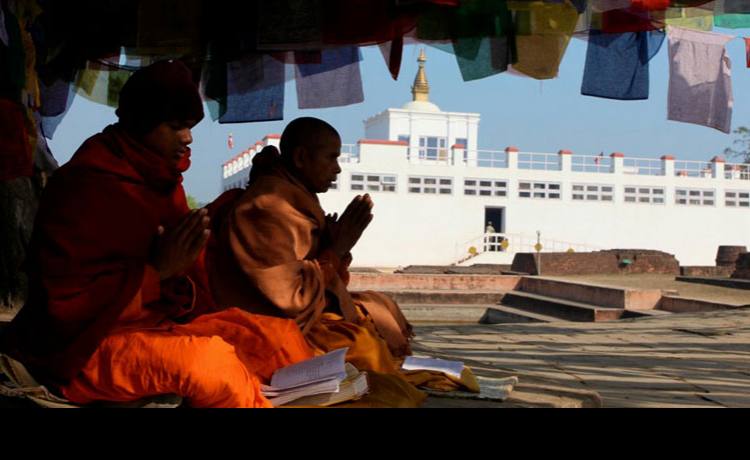 Buddhists from all over the world consider a visit to Lumbini, Nepal, birth place of, Siddhartha Gotama, later known as Buddha, a lifetime destination. Lumbini is one of four sacred locations of what is known as The Buddhist Circuit. Of these four, Lumbini is the only one located in Nepal (the other three are in India: Bodh Gaya--site of  Buddha's enlightenment, Sarnath--site of his first teaching and Kushinagar--site of Buddha's earthly death).

On a full moon in May around the year 623 B.C.E., Buddha was born as Siddhartha Gautama to a royal family under a sal (Shorea robusta) tree in Lumbini now part of the southern plains of Nepal. His mother died shortly after giving birth, and he was raised by an aunt at the main compound west of Lumbini in an area known as Tilaurakot.

At the time of Buddha’s birth, Lumbini was a serene garden belonging to King Suddhodana, his father. In the second century, renowned Emperor Ashoka visited and built a pillar that is still standing next to Maya Devi Temple, a temple named erected over the birth site and named for Buddha's mother. Lumbini and the temple marking the birthpalce are designated a UNESCO World Heritage Site (Historical).

On the Secrets of the Himalaya Lumbini Tour of Buddha's birthplace, we pay a special visit to the actual birth site and the surrounding majestic monasteries and shrines in the birthplace area. Our expert, locally-sourced guide reveals the main highlights and attractions of this revered destination.

Lumbini is visited by by both Buddhists and non-Buddhists alike. A tour of the World Heritage Site of ancient Lumbini is a step back in time to a spiritually significant location of one of the most prominent religous figures in history. Please find two stories about the Buddha, written by the Secrets of the Himalaya founder, Alonzo Lyons for the Reality Sandwich website--Jungle Rumble and Home Sweet Home Samsara.

Please Note: Our Lumbini Tour has regular departures from Kathmandu and Pokhara. This tour provides an insider’s look at the heart of Buddhism and ancient history with profound significance for modern times--the birth of Siddartha Gotama. If you would like to see more of the area, then we can also arrange a greater Lumbini Tour package to fit your specific interests and style with additional options, too.

Day 01Scenic Drive to Lumbini (150 m / 492 ft)We begin after breakfast with a scenic drive in private vehicle to Lumbini, birthplace of Buddha. After checking into our hotel and freshening up, we begin a tour of the area and the many surrounding monasteries and highlights. (Lunch and Dinner included)

Day 02Full Day Tour of Lumbini and ancient kingdom of KapilavastuWe continue the tour after a leisurely breakfast. Today we visit the actual birth site of Buddha at Maya Devi Temple (the temple is named after Buddha's mother). We then tour the ancient kingdom where Buddha was raised as a prince before departing into the wanderer's life. Return to hotel for overnight. (B/L/D included)

Day 03Scenic Drive to Pokhara or KathmanduAfter breakfast we say goodbye to Lumbini and board a vehicle for a scenic return journey to Kathmandu or Pokhara depending on your next destination.

Take over a Date

Have a group already?

Make it a private tour by taking over a date. Price range is determined by a sliding scale to customize preferred time-frame and number of travelers.