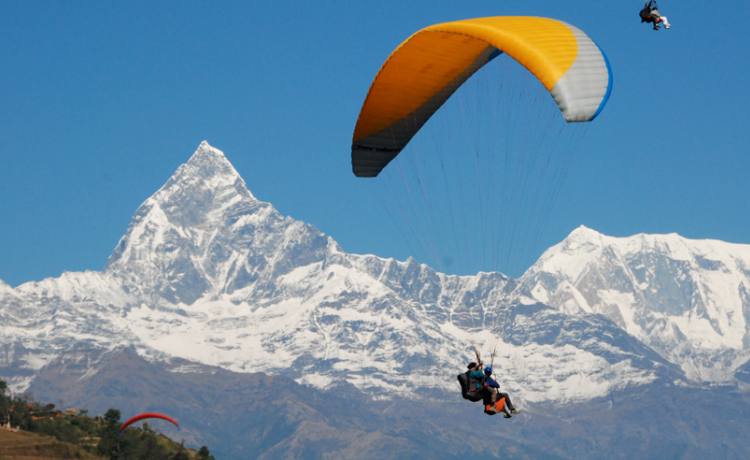 Paragliding in Nepal
Cost from:
US $125/person

Join us for an exhilarating paragliding experience, aka, air safari, of Himalayan skies and surrounding valleys. Paragliding in Nepal provides perhaps the best viewpoint vantage imaginable of the fascinating landscape and peaks, a safari from the air. Secrets of the Himalya now has launch sites in both Kathmandu and Pokhara and beyond to even more remote areas, too. We also offer multi-day paragliding tours--a true air safari experience, and our Flying Yeti Special--a paragliding air safari with Sano Babu, National Geographic Adventurer of the Year, 2012. Babu tandem launched off the summit of Everest. Read about his dazzling, record-breaking adventure that began in Nepal's Everest Region (written for Nepal's leading culture magazine ECS Nepal by Secrets of the Himalaya founder Alonzo Lyons)--Flying Snow Leopards of Nepal

Please inquire for more information on this special experience and much more about paragliding in rarefied Himalayan air. Contact us now for more details, himalayasecrets@gmail.com.

Take over a Date

Have a group already?

Make it a private tour by taking over a date. Price range is determined by a sliding scale to customize preferred time-frame and number of travelers.